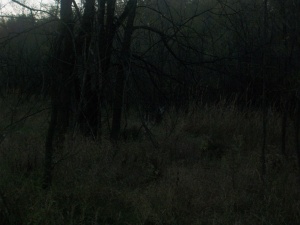 Biked over to Lake Z today, around both halves and then home again.  Left home at 7. I am starting to have less and less light in the morning-I dont like it!  It was 43 degrees when I left and I think I overdressed a bit. I had on a tshirt, LS shirt, my running jacket, (which is pretty thin) and a white thicker jacket over top. I also wore my gaiter, ear warmers and gloves. I also tried wearing some wind pants over my running tights, I think that was an overkill too. I probably could have done without the extra jacket and left off the running tights and been fine. That first 5 minutes is cold though!

Saw some deer, geese, cranes and turkey on my ride!  Pretty cool! Tried to get some good picutures but all I had was my girls’ camera which isnt the best. Couldnt zoom in very far and the flash was WEAK!  So the pictures were pretty poor quality. Next time, even though it is HUGE, I am going to take my camera.

I tried to add a picture of the deer and the turkey. No clue if it worked though!  =)

This entry was posted in Uncategorized. Bookmark the permalink.